For display output, there are a few options including Display Port 1.4a and HDMI 2.1. The maximum resolution is 7680×4320. There is no DVI, VGA or USB-c. Connecting this graphics card to the motherboard is the PCI-e 4.0 x16 interface. The AMD Radeon RX 6750 XT requires one 8 pin power connector and one 6 pin power connector as it uses 250 W of power. AMD recommends a PSU of at least 650 W. 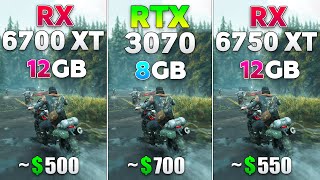