The AMD Radeon RX 6950 XT can handle a variety of heavy duty tasks and gaming thanks to its 16GB of GDDR6 memory which comes as standard. The memory is running at an effective memory clock of 18000 MHz, it has a interface width of 256 bit and a bandwidth of 576 GB/s.

The maximum resolution of this graphics card is 7680×4320. For display output options there is Display Port 1.4a and HDMI 2.1. There is no USB-c, DVI or VGA. The interface of this graphics card is PCIe 4.0 ×16. It requires 2×8 pin power connectors from your PSU as it draws a maximum of 335W. The recommended power supply is therefore at least 850W. 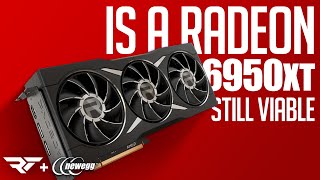