DirectX version 12 runs on this card in addition to OpenCL 2.1, OpenGL 4.6 and shader model 6.7. This graphics card supports AMD FreeSync Technology, DirectX 12 Technology and The Vulkan API. There is no CrossFire support on the AMD Radeon RX 5300 and it is not VR Ready.

The maximum resolution is 7680×4320 achievable by using the Display Port 1.4a connectors. There is also HDMI 2.0b. There is no USB-c, DVI or VGA on this graphics card. Connecting this graphics card to the motherboard is the PCI-e 4.0 x8 interface although lower PCI-e versions can be used. This graphics card requires one 6 pin power connector and it draws a maximum of 100W. This means the recommended PSU size is at least 300W. 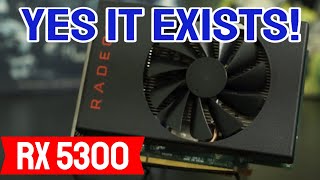