For memory, the AMD Radeon RX 6500 XT 4GB features 4GB of fast GDDR6 memory running at an effective memory clock of 18000 MHz. It has a memory interface width of 64-bit and a memory bandwidth of 144 GB/s.

For ports, this card has Display Port 1.4a and HDMI 2.1. The maximum resolution is 7680×4320. There is not USB-c, DVI or VGA. Connecting this graphics card to the motherboard is a PCI-e 4.0 x4 interface. A single 6 pin power connector is required from your power supply as this card draws 107 W of power. AMD recommend a PSU of at least 400 W. 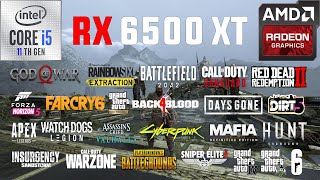